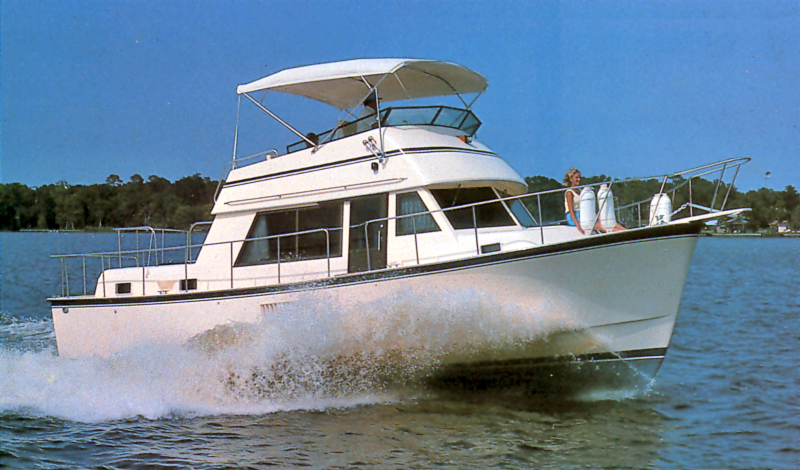 Name: 37 Double Cabin
Length: 36'7"
Hull Type: Semi-Disp.
Gross Weight: --
Fuel Capacity: 250 gals.
Model Years: 1982—1992
Draft: 3'3"
Beam: 13'9"
Water Capacity: 200 gals.
Waste Capacity: 30 gals.
Length w/ Pulpit: --
Boating enthusiasts may recognize the Atlantic 37 Double Cabin as the old Prairie 36 Coastal Cruiser, a traditional Hargrave-designed trawler built on a semi-displacement hull with soft chines and a full-length keel. Prairie produced the 36 model from 1979 until early 1982 when the company closed down. The Prairie 36 had been very well received in the market having earned a reputation as a quality family cruiser, albeit at a somewhat hefty price. Following Prairie’s demise, Atlantic Yachts acquired the molds and tooling for the Prairie 36 and reintroduced her in 1982 as the Atlantic 37 Double Cabin. Her compact two-stateroom floorplan is arranged with the galley down, and there are separate stall showers in both heads—a real plus in a boat this size. The teak woodwork used throughout the interior is very well crafted, and there are convenient port and starboard deck access doors in the salon. A bow pulpit and fold-down mast and boom were standard. Several engine options were offered for the Prairie 36/Atlantic 37 during her production years. Those powered with twin 120/135hp Lehman diesels cruise at up to 10 knots, and the twin 250hp Cummins (or GM) diesels cruise at 14–15 knots.