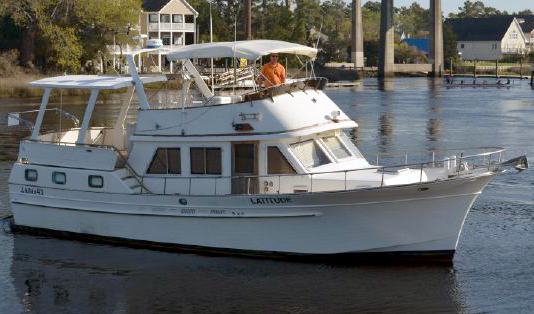 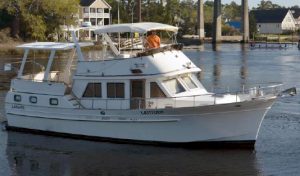 Name: 43 Sundeck
Length: 43
Hull Type: Semi-Disp.
Gross Weight: --
Fuel Capacity: 500 gals.
Model Years: 1981—1994
Draft: 4'1"
Beam: 14'6"
Water Capacity: 300 gals.
Waste Capacity: 60 gals.
Length w/ Pulpit: --
Based upon the popular Albin 43 Trawler (1979–94) that preceded her by two years in the Albin fleet, the 43 Sundeck features a full-width aft deck (as opposed to the trunk cabin profile of the 43 Trawler) and slightly larger aft cabin dimensions than her sistership. In other respects, the two boats are about the same. The hull is constructed of solid fiberglass, and a full-length keel provides grounding protection for the running gear. The original two-stateroom, galley-down floorplan was the most popular, although a dinette layout and a three-stateroom (charter) arrangement were also available. Well-crafted teak interior paneling and joinery abound, and large wraparound windows allow for plenty of natural salon lighting. A lower helm was standard, and deck access doors were fitted port and starboard in the salon. Unlike most sundeck designs from other manufacturers, the Albin 43 lacks a salon access door from the aft deck—a notable shortcoming. Twin 135hp Lehmans cruise at 8–9 knots, and a pair of 210hp Cummins (standard in later models) cruise at 12–13 knots. Note that the Albin 49 Cockpit (1979–94) is the same boat with a cockpit extension.