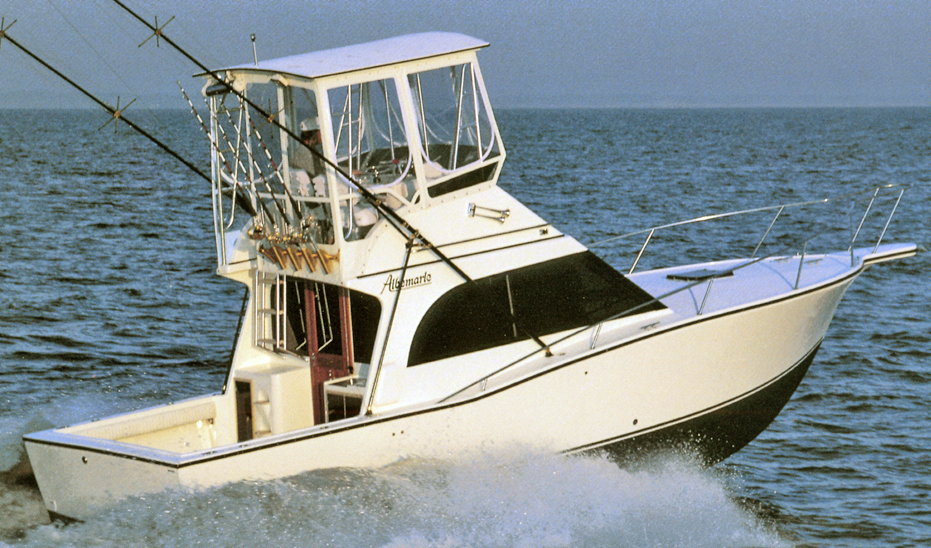 Name: 325 Convertible
Length: 32
Hull Type: Modified-V
Gross Weight: --
Fuel Capacity: 300 gals.
Model Years: 1988—2003
Draft: 3'0"
Beam: 11'0"
Water Capacity: 30 gals.
Waste Capacity: 25 gals.
Length w/ Pulpit: 34'9"
Introduced in 1988, the Albemarle 325 is one of the few flybridge boats under 35 feet produced in recent years. The 325 is a handsome boat with rakish styling and a well-flared bow, and her large 80-square-foot cockpit offers the fishing space found in many larger boats. In spite of her small size, the galley-down interior of the Albemarle 325 boasts a surprisingly roomy salon with room for a convertible sofa and two chairs. The enclosed head is one of the largest on any 32-footer and includes a separate stall shower. Air conditioning, teak cabinets and trim, and an entertainment center were standard. To address complaints about a harsh ride, a major redesign occurred in 1999 when Albemarle engineers moved the engines forward 10 inches, replaced the original three-tank configuration with a single fuel tank, and recessed the trim tabs into the hull. Cabin headroom was also increased in 1999, and a transom door and lift-out fish box were added in the cockpit. Early models with 330hp Volvo gas engines cruise at 22 knots (30+ knots top). Later models with twin 350hp 3116 Cat diesels cruise in the mid 20s (around 30 knots top).