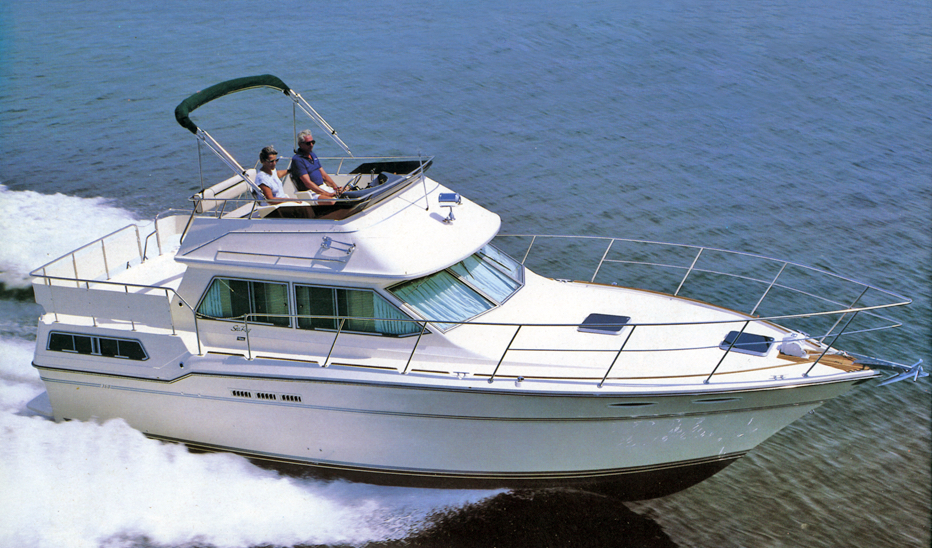 Name: 360 Aft Cabin
Length: 36'3"
Hull Type: Modified-V
Gross Weight: --
Fuel Capacity: 270 gals.
Model Years: 1983—1987
Draft: 2'11"
Beam: 12'6"
Water Capacity: 120 gals.
Waste Capacity: 40 gals.
Length w/ Pulpit: --
A very popular boat during her late 1980s production years, the Sea Ray 360 Aft Cabin was built on a “dual mode” hull capable of trawler-style economy at 7–8 knot displacement speeds while still able to achieve planing-speed performance. She rides on a low-deadrise, solid fiberglass hull with moderate beam, prop pockets, and a shallow, full-length keel. The 360’s interior is somewhat unusual in that twin single berths were standard into the smallish aft stateroom (although a double berth was optional). The galley is down, separated from the salon by a serving counter, and a portside lower helm was a popular option. Teak cabinets and paneling and vinyl overheads highlight the interior. Topside, the 360’s full-width aft deck is on the small side with room for only a couple of deck chairs. Wide side decks make it easy to get around, and the flybridge is arranged with bench seating aft of the helm. Note that most of these boats were sold with an optional hardtop. Standard 260hp MerCruiser gas engines cruise the 360 Aft Cabin at a modest 15 knots and reach a top speed of 23–24 knots. Optional 200hp Perkins diesels provide a cruising speed of 15–16 knots (about 20 top).