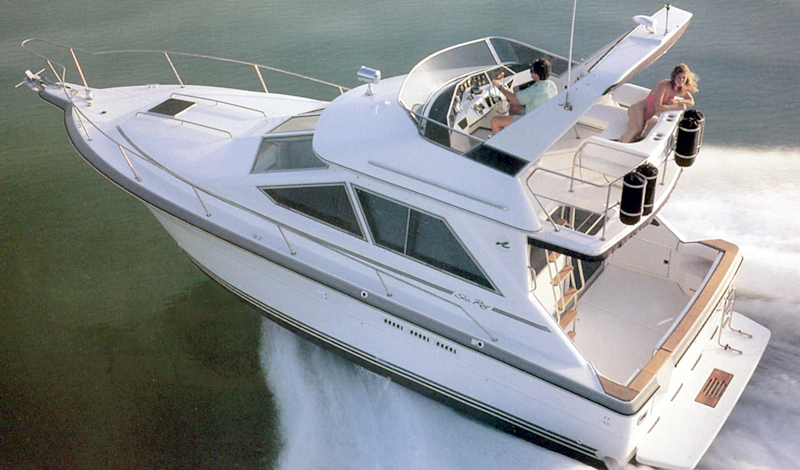 Name: 345-340 Sedan Bridge
Length: 33'9"
Hull Type: Modified-V
Gross Weight: --
Fuel Capacity: 250 gals.
Model Years: 1988—1989
Draft: 3'9"
Beam: 12'6"
Water Capacity: 100 gals.
Waste Capacity: 30 gals.
Length w/ Pulpit: --
Lasting only two years in production, Sea Ray introduced this model in 1989 as the 345 Sedan Bridge and—for some marketing-related reason—called her the 340 Sedan Bridge the following year. Clearly, this was not one of Sea Ray’s better-looking boats. While the interior is big for a 34-foot sedan, the extended flybridge, unusually tall arch, and small cockpit give the 340/345 Sedan Bridge an ungainly, decidedly unattractive appearance. She was built on a solid fiberglass hull with prop pockets and a wide 12-foot, 6-inch beam. Below, the two-stateroom floorplan will sleep six and includes a private midcabin with partial standing headroom under the dinette. Note that the galley is aft in the salon, an unusual layout in a sedan-style boat but one that permits easy galley access from the cockpit. As previously stated, the cockpit is very small, but its oversized flybridge includes lounge seating aft of the helm. A transom door, swim platform, and bow pulpit were standard. On the downside, the side decks are seriously narrow. Twin 340hp MerCruiser gas engines cruise the Sea Ray 340/345 Sedan Bridge at 20 knots and deliver a top speed of close to 30 knots.

Spacious interior with U-shaped dinette forward includes private mid-stateroom with partial standing headroom below dinette. Galley is aft in the salon—unusual in a sedan-style boat, but convenient to those in the cockpit. Big interior results in a very small cockpit.

Twin 340hp gas engines cruise at 20 knots and deliver a top speed of close to 30 knots.