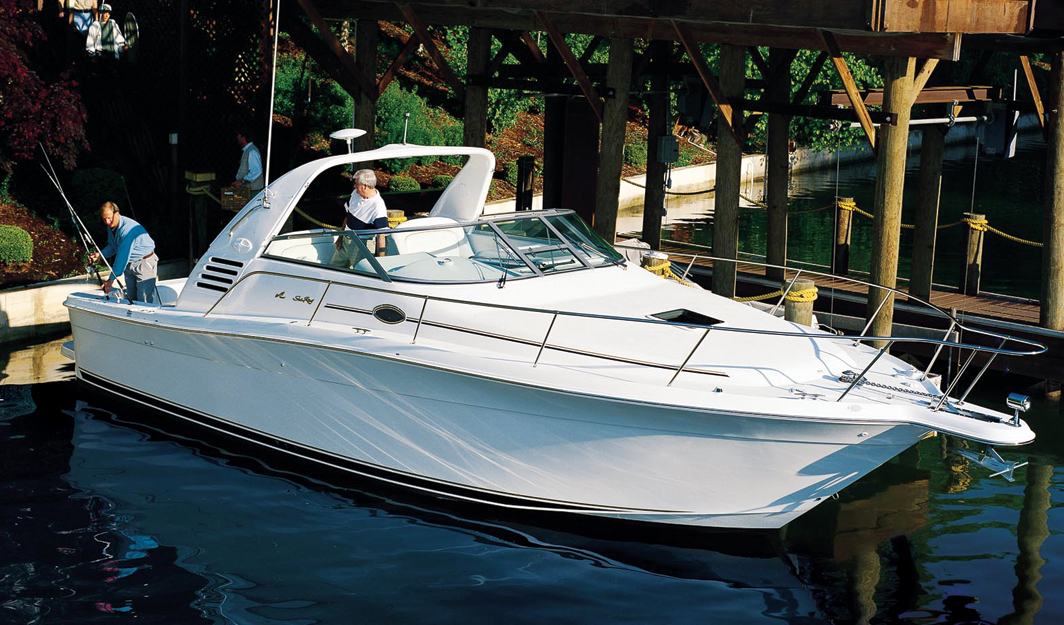 Name: 340 Amberjack
Length: 34
Hull Type: Deep-V
Gross Weight: --
Fuel Capacity: 275 gals.
Model Years: 2001—2003
Draft: 3'0"
Beam: 13'5"
Water Capacity: 50 gals.
Waste Capacity: 28 gals.
Length w/ Pulpit: --
A versatile boat designed for fishing as well as cruising, the Sea Ray 340 Amberjack (called the 330 Express Cruiser in 1997–2001) is one of the roomiest boats in her class thanks to a super-wide 13'5"" beam. Indeed, this is a big 33-footer with a wide-open cockpit and a very spacious interior. Built on a fully cored deep-V hull with prop pockets, the original Express Cruiser floorplan was arranged with a V-berth in the forward stateroom and a sofa in the salon. In 2001—when she became the 340 Amberjack—the interior was redesigned to include an angled double berth forward and a full-size dinette in the salon. In both layouts the stateroom is separated from the salon by two sliding doors. Cockpit amenities include an in-deck livewell and fish box, a foldaway bench seat at the transom, and a clever dual-purpose bait prep station/wet bar behind the helm seat. The entire bridge deck can be raised electrically for engine access. Additional features include a centerline windshield vent, radar arch, wide side decks, and rod storage in the cabin sole. Twin 370hp MerCruiser inboards cruise at 20 knots and top out at close to 30 knots.