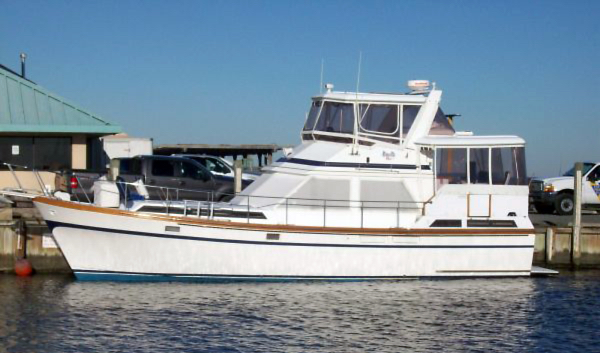 Name: 43 Double Cabin
Length: 43
Hull Type: Modified-V
Gross Weight: --
Fuel Capacity: 420 gals.
Model Years: 1984—1988
Draft: 3'2"
Beam: 13'10"
Water Capacity: 120 gals.
Waste Capacity: --
Length w/ Pulpit: --
The President 43 Double Cabin is a stretched version of the company’s very popular President 41 Double Cabin introduced a couple of years earlier. Like her predecessor, the 43 is built on a solid fiberglass hull with moderate beam and a shallow, full-length keel. At just 28,000 pounds, she’s a light boat for her size, which explains her good performance with relatively small engines. President offered a pair of two-stateroom interiors in the 43, both of which were completely finished with teak cabinetry and woodwork. The staterooms in both of these floorplans are very large for a 43-footer, and large wraparound cabin windows admit plenty of natural lighting in the salon. Note that a lower helm station was optional. One of the highlights of the President 43 is her large afterdeck with its standard wet bar, teak deck, and hardtop. Additional features include a well-arranged engine room, wide side decks, radar arch, bow pulpit, and teak swim platform. Several diesel options were offered over the years. Among them, twin 275hp Lehmans cruise the President 43 at 14–15 knots and reach a top speed of 18 knots. A total of 42 were built.