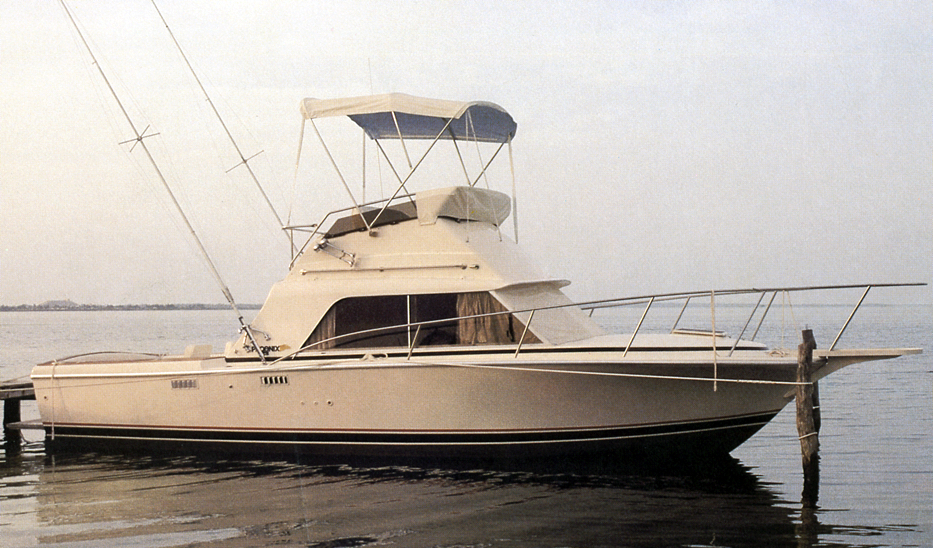 Name: 29 Convertible
Length: 28'10"
Hull Type: Deep-V
Gross Weight: --
Fuel Capacity: 160/260 gals.
Model Years: 1977—1987
Draft: 2'4"
Beam: 10'0"
Water Capacity: 50 gals.
Waste Capacity: --
Length w/ Pulpit: --
Introduced in the late 1970s, the Phoenix 29 Convertible had a long and successful production run for Phoenix before being replaced with an all-new 29-foot model in 1988. Over 750 were built, and during that time she earned the respect of many anglers and cruisers for her clean, low-profile styling, large cockpit, and durable construction. Below deck, the strictly-business interior of the Phoenix 29 is surprisingly spacious for a boat of her size and type. There’s plenty of elbowroom throughout the cabin, and both the head and galley are conveniently located just inside the salon door. Berths are provided for four adults and two kids. Topside, a bench seat on the small flybridge will seat three. The bi-level cockpit is free of obstructions with plenty of room for serious fishing pursuits. Note that the Phoenix 29 could be ordered with a closed or open aft bulkhead. Prop pockets—which reduce draft requirements—allow her to cruise in some very shallow waters. On the downside, some consider the Phoenix 29 to be a bit tender. Several engine choices were offered over the years. Popular 124hp Volvo diesels cruise efficiently at 18 knots and turn 22 knots top. Later models with 165hp Volvos cruise at 20–21 knots.