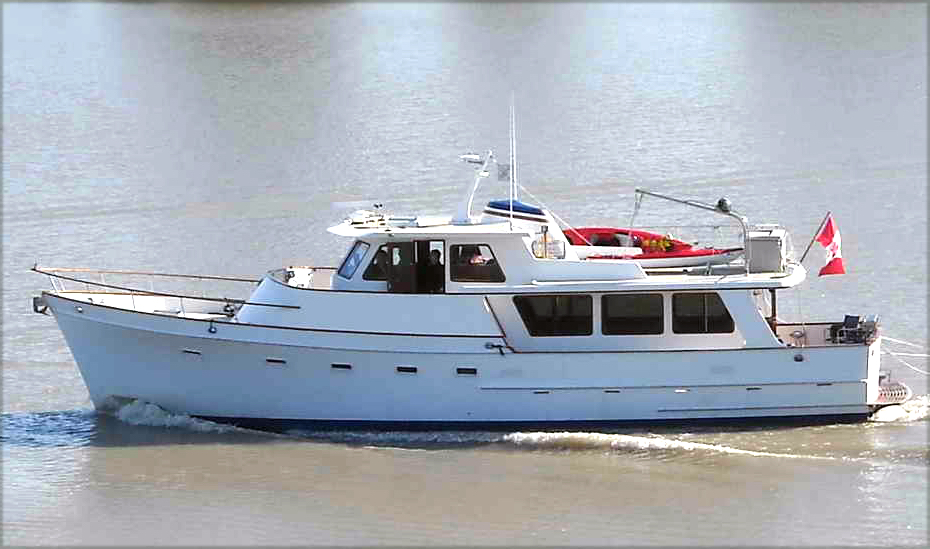 Name: 50 Pilothouse MK I
Length: 50
Hull Type: --
Gross Weight: --
Fuel Capacity: 1000 gals.
Model Years: 1978—1983
Draft: --
Beam: --
Water Capacity: --
Waste Capacity: --
Length w/ Pulpit: --
The first Ocean Alexander model brought into the US market, the Alexander 50 Pilothouse MK I was a very successful design (92 were sold during her production run) and is now something of a classic on the West Coast. Her appeal had as much to do with an affordable price as it did with her rugged appearance. Construction is solid fiberglass and the Portuguese bridge surrounding the pilothouse provides an extra level of security in heavy seas. The spacious two stateroom interior (fully paneled with teak woodwork and trim) is arranged similar to other pilothouse layouts with a spacious amidships owner’s cabin and full service U-shaped galley on the deckhouse level. The raised pilothouse is completely private and comes with port and starboard deck access doors as well as a built-in dinette and watch berth. A flybridge overhang shelters the small cockpit, and the upper helm station is set well aft of the pilothouse. Additional features include a transom door, wide side decks, and an extended flybridge with space for a dinghy. Among several engine choices, the MK I will cruise at 11–12 knots with 320hp Cat or 270hp Cummins diesels.