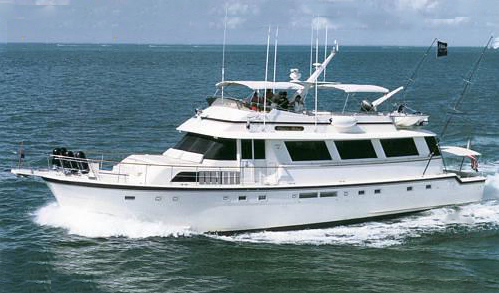 Name: 72 Cockpit Motor Yacht
Length: 72'0"
Hull Type: Modified-V
Gross Weight: --
Fuel Capacity: 1,750 gals.
Model Years: 1981—1986
Draft: 5'3"
Beam: 18'2"
Water Capacity: 350 gals.
Waste Capacity: 100 gals.
Length w/ Pulpit: --
The Hatteras 72 Cockpit Motor Yacht was never a production model from Hatteras. In fact, the 72 is actually a Hatteras 63 Motor Yacht with an aftermarket cockpit extension added by a custom yard like Roscioli or Cable Marine. Typically, the aft deck was lengthened by four feet and a five-foot cockpit was added (along with increased fuel capacity). The widebody interior mirrors that of the 63 Motor Yacht with three staterooms and heads below, accessed from a curved staircase in the salon. Designed as a crewed yacht, the layout has the salon separated from the wheelhouse and dinette by a privacy door aft of the galley. The master stateroom is huge and includes a walkaround king bed, walk-in closet, and private head with tub/shower. Both guest staterooms are forward and reached through a hallway between the separate engine rooms. Crew quarters for three in two private cabins are accessed by a separate stairway forward. Note the lazarette storage in the cockpit. The exact number of Hatteras 72 Cockpit MYs created over the years is not known, but used models are not uncommon on the brokerage market. Detroit 12V71 engines will cruise at 16–18 knots.