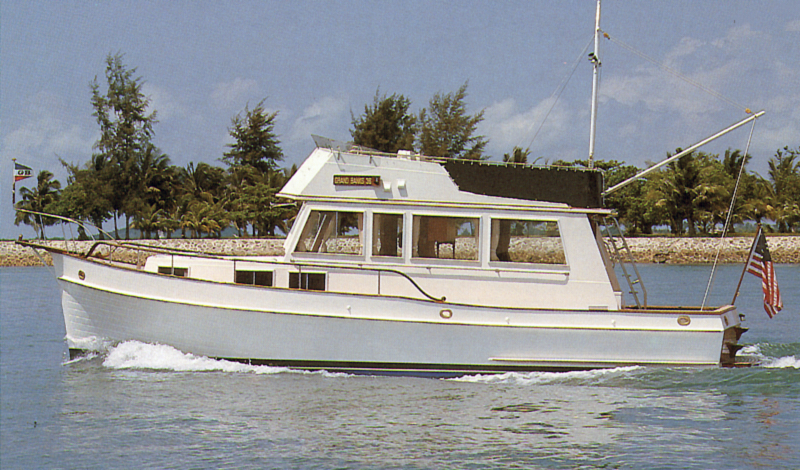 Name: 36 Sedan
Length: 36
Hull Type: Semi-Disp.
Gross Weight: --
Fuel Capacity: 400 gals.
Model Years: 1984—1996
Draft: 4’0”
Beam: 12’8”
Water Capacity: 205 gals.
Waste Capacity: 40 gals.
Length w/ Pulpit: --
The Grand Banks 36 Sedan is the same boat as the GB 36 Europa without the Europa’s bridge overhangs. The Europa was a better selling boat than the Sedan (probably because of her more handsome lines) although the Sedan preceded her in the Grand Banks fleet by several years. She was built on a seaworthy semi-displacement hull with moderate beam, a deep forefoot, and a full-length, prop-protecting keel. Two floorplans were available during her production years: the standard arrangement has two staterooms, and the alternate single-stateroom layout is arranged with a walkaround queen berth forward and a split head. On the deckhouse level, the galley is forward in the salon, across from the lower helm station. There’s room enough in the cockpit for a couple of anglers, and wide side decks provide easy access to the foredeck. Additional features include a full teak interior, a fold-down mast and boom assembly, deck access door, and a large flybridge with double back-to-back seats. A single 135hp diesel will cruise the Europa economically at 7–8 knots (about 10 knots top) burning only 2–3 gph. Twin 210hp Cummins diesels (optional) will cruise at 9–10 knots and deliver a top speed in the 15-knot range.