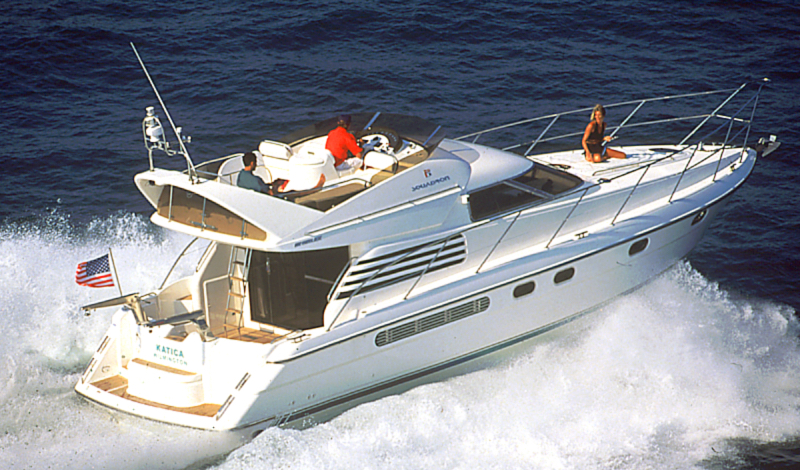 Name: 43 Squadron
Length: 43
Hull Type: --
Gross Weight: --
Fuel Capacity: 360 gals.
Model Years: 1994—1997
Draft: 3'6"
Beam: 13'7"
Water Capacity: 130 gals.
Waste Capacity: --
Length w/ Pulpit: --
Smallest in Fairline’s series of Squadron motor yachts during her mid-1990s production years, the 43 Squadron is a traditional European flybridge cruiser from what was once one of Britian’s largest powerboat manufacturers. Like most of her European competitors, she’s built on a deep-V hull with moderate beam, an integrated swim platform, and propeller tunnels to reduce shaft angles and draft. While a three-stateroom layout was available, the two-stateroom floorplan is generally considered more practical in a boat this size. This is a raised-pilothouse design with the helm completely open to the salon and a well-appointed sunken galley to port. The guest stateroom is tucked under the lower helm (headroom in the entryway only), and the head adjoining the master stateroom is huge. The main area of the deckhouse is finished in light maple, and the lower-level salon windows give a good view of the outside for passengers. Both the cockpit and swim platform are teak-planked, and fender storage is built into the stylish transom. With standard 420hp Cat diesels, the 43 Squadron will cruise at 25 knots and reach 30+ knots wide open.