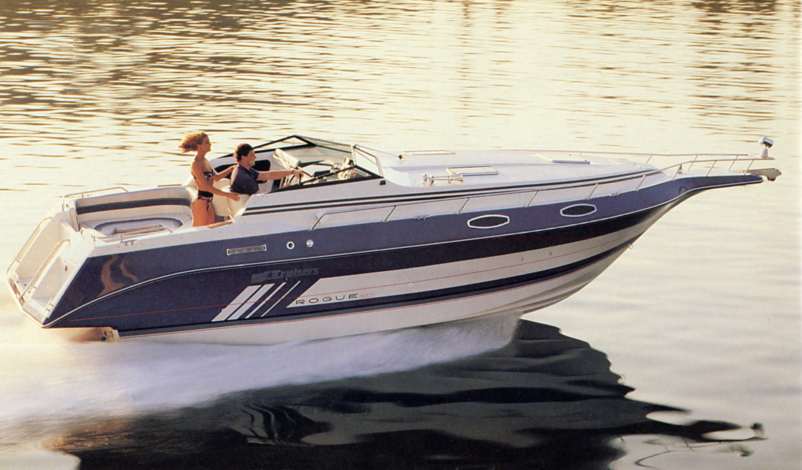 Name: 286-2860-3000 Rogue
Length: 28
Hull Type: Modified-V
Gross Weight: --
Fuel Capacity: 120 gals.
Model Years: 1987—1989
Draft: --
Beam: 10'0"
Water Capacity: 31 gals.
Waste Capacity: --
Length w/ Pulpit: 32'11"
Introduced in 1987 as the 286 Rogue, Cruisers changed the model designation of this boat twice during the next two years: in 1988 she was called the 2860 Rogue, and in 1989 (the last year of production) she was called the 3000 Rouge. She was a fairly stylish boat in her day with dramatic hull graphics, an integrated swim platform, and an elongated bow pulpit. Built on a solid fiberglass deep-V hull with moderate beam, the Rogue’s midcabin floorplan differed from most of her 1980s counterparts in that the forward stateroom can be closed off from the main cabin for privacy. A convertible dinette is opposite the compact galley, and teak veneers are used for bulkheads and cabinets. In the cockpit, a double-wide companion seat and facing settees aft seat as many as six passengers. An unusually wide transom door on the centerline provides easy access to the swim platform. On the downside, the side decks are narrow and cabin headroom is just over 6 feet. Note that the 286 and 2860 models came standard with a radar arch. Among several engine options available during her production years, twin 260hp I/Os cruise at 23 knots (about 33–34 knots top).