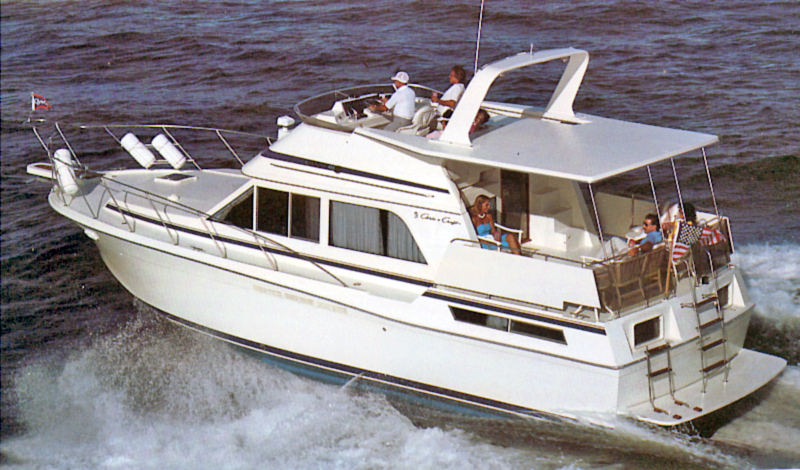 Name: 425-426-427 Catalina
Length: 42
Hull Type: Modified-V
Gross Weight: --
Fuel Capacity: 400 gals.
Model Years: 1985—1990
Draft: 3’6”
Beam: 14’9”
Water Capacity: 160 gals.
Waste Capacity: 60 gals.
Length w/ Pulpit: --
The Chris 425/426/427 Catalina began life in 1971 as the Uniflite 42 Double Cabin. She turned out to be one of Uniflite’s most popular boats and earned a reputation for sturdy construction and a practical, well-arranged interior. In 1984, Uniflite ceased operations when the company went bankrupt. Chris Craft bought the molds (as well as the old Uniflite production facility in Bellingham, WA) and resumed production of this model the following year, calling her the Chris 425 Catalina Double Cabin. While she looked exactly like the old Uniflite from the outside, the Catalina had a fresh interior layout with walkaround queen berths fore and aft—something the Uniflite 42 never had during her production years. The 425 designation lasted only a year; in 1986 she was called the 426 Catalina and benefited from a restyled and enlarged flybridge. The 427 designation came in 1987 and there were no further updates of significance. With standard 350hp Crusader gas engines, the cruising speed of the Catalina is 17–18 knots (mid 20s wide open). Optional 375hp Cat diesels cruise at 21–22 knots and reach a top speed in the mid 20s.

Updated version of earlier Uniflite 42 (1971-84) turned out to be a popular model for Chris Craft. Known for her smooth ride, good handling qualities.