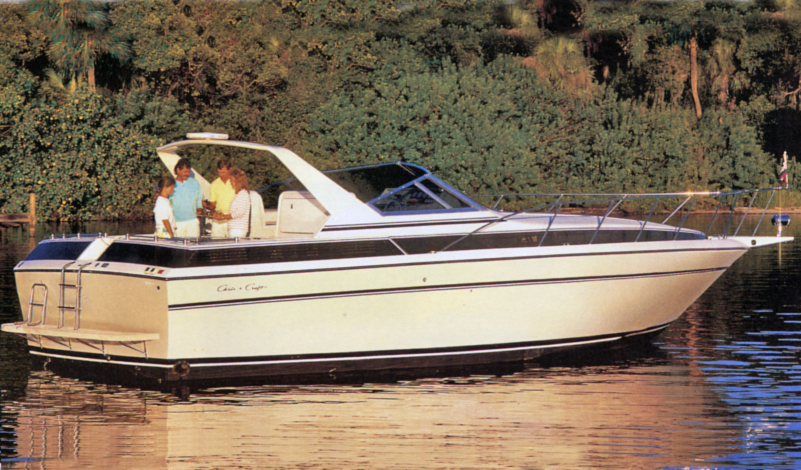 Name: 412 Amerosport Express
Length: 38'9"
Hull Type: Modified-V
Gross Weight: --
Fuel Capacity: 380 gals.
Model Years: 1987—1990
Draft: 3'2"
Beam: 14'0"
Water Capacity: 100 gals.
Waste Capacity: --
Length w/ Pulpit: --
When the Chris Craft 412 Amerosport was introduced back in 1987 she was one of the bigger full-production express cruisers available on the market. Like most Chris Craft models of her era, she was built on a solid fiberglass hull with moderate beam and a shallow keel. Obviously dated by today’s Euro-glitz sportboat standards, her bolt-on swim platform and overdone hull graphics seriously detracted from her otherwise conservative appearance. Inside, the downscale furnishings and inexpensive decor of the 412 compared poorly with other boats of her type. Privacy curtains were used to separate the fore and aft sleeping areas from the salon, and a roomy head compartment stands in contrast to a rather compact galley. Outside, the driver’s helm position is a bit low, and forward visibility—especially on hard acceleration—is not the best. The cockpit is arranged with facing U-shaped settees with a removable table and seating for eight to ten passengers. Standard 454-cid gas engines cruise the Chris Craft 412 Amerosport at a steady 17–18 knots and deliver a top speed of about 27 knots. Note that she was called the 400 Express Cruiser in 1990.