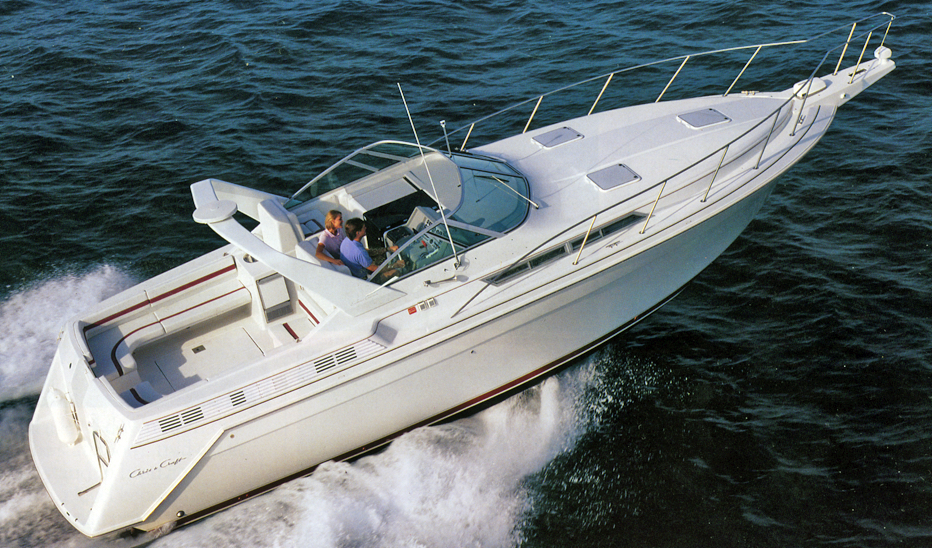 Name: 370 Amerosport; 360 Express
Length: 38'7"
Hull Type: Deep-V
Gross Weight: --
Fuel Capacity: 300 gals.
Model Years: 1988—1992
Draft: 3'0"
Beam: 13'0"
Water Capacity: 50 gals.
Waste Capacity: --
Length w/ Pulpit: --
The Chris Craft 360 Express (called the 370 Amerosport in 1988–89) differs from most family express boats due to her somewhat unusual interior layout. Two midcabin floorplans were used in this boat—the first lasted just a year before being replaced in 1989 by a new layout where the midcabin lounge extends right into the salon—something unique in midcabin designs that, according to Chris Craft marketing blurbs, opened up the salon and gave one the impression of being aboard a much larger boat. In reality, the layout was a poor one in that the dinette lounge was too far aft in the salon and the seating arrangement was impractical and generally uncomfortable. So much for the interior, which, by the way, is a tour de force of cheap fabrics and furnishings typical of so many Chris Craft products in the late 1980s and 1990s. The bi-level cockpit, on the other hand, is very spacious with plenty of guest seating, a transom door, a double helm seat and a built-in wet bar. A radar arch and bow pulpit were standard. A good running boat in a chop, standard 350hp gas engines cruise the Chris 360 Express around 18 knots (26–27 knots top).