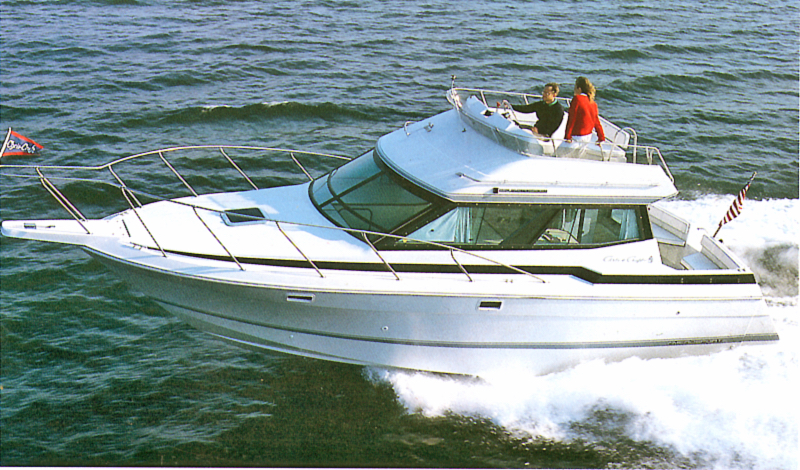 Name: 320 Amerosport Sedan
Length: 31'11"
Hull Type: Modified-V
Gross Weight: --
Fuel Capacity: 200 gals.
Model Years: 1987—1990
Draft: 2'8"
Beam: 11'11"
Water Capacity: 50 gals.
Waste Capacity: 18 gals.
Length w/ Pulpit: --
An inexpensive and distinctive boat with a rakish profile, the 320 Amerosport (note that she was called the 322 Catalina Sedan in 1990) had a moderately successful four-year production run before Chris Craft dropped her from the lineup in 1991. She was built on a conventional modified-V hull with solid fiberglass construction and a relatively wide beam. Inside, the Amerosport’s midcabin floorplan is arranged with a second “stateroom” tucked below the elevated salon dinette. A lower helm was optional, and the wide beam and 360-degree cabin windows make for a spacious and wide-open interior. The original teak woodwork was updated in 1990 to light oak. Outside, the cockpit comes with built-in bench seating at the transom, and the flybridge has the helm forward with guest seating aft. Note the bolt-on reverse swim platform, a cheap-looking add-on that came to symbolize the way Chris Craft built most of their boats back in the 1980s. Additional features include fairly wide side decks, a walk-through transom gate, and a separate stall shower in the head. With a pair of 270hp gas engines the 320 Amerosport Sedan will cruise around 18 knots (mid 20s top).