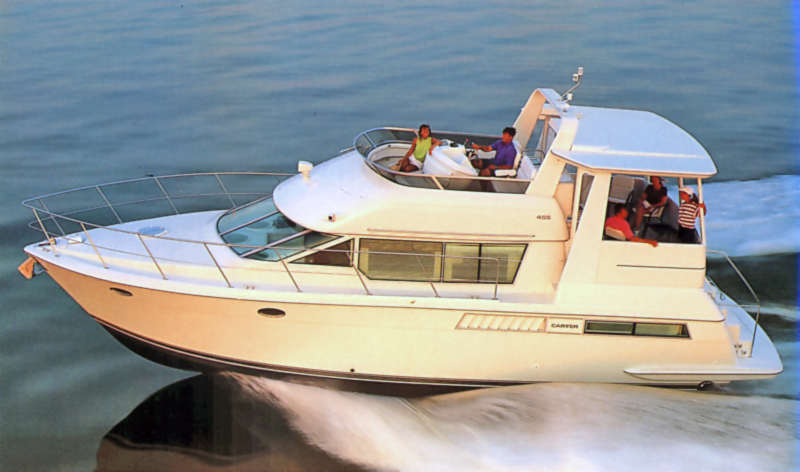 Name: 455-456 Aft Cabin Motor Yacht
Length: 45'9"
Hull Type: Modified-V
Gross Weight: --
Fuel Capacity: 464 gals.
Model Years: 1996—2000
Draft: 4’7"
Beam: 15'4"
Water Capacity: 132 gals.
Waste Capacity: 80 gals.
Length w/ Pulpit: --
The Carver 455 Aft Cabin Motor Yacht (called the 456 Aft Cabin MY in 1999–2000) is a mid-tier cruising yacht whose distinctive floorplan differs from most late-model motoryacht interiors. Beginning with the original three-stateroom layout of the 455 and continuing in the two-stateroom interior of the 456, the galley is aft in the salon rather than forward as it is in most motoryacht this size. This makes galley access easy from the aft deck and bridge while at the same time pushing the salon seating and entertaining areas forward. Also notable is the aft-facing queen bed in the master stateroom—not a bad idea if you like looking out of the transom window at night, but definitely a different layout. In the three-stateroom interior of the 455, the forward guest stateroom is very large and a folding bulkhead conceals a small guest stateroom to port with convertible bunk beds. (By leaving the bulkhead open the space becomes part of the forward stateroom.) Additional features of the Carver 455/456 Aft Cabin include maple wood interior trim, tub/shower in the forward head, washer/dryer cabinet, wing doors, and molded transom boarding steps. Cummins 450hp diesels cruise at 18–20 knots.