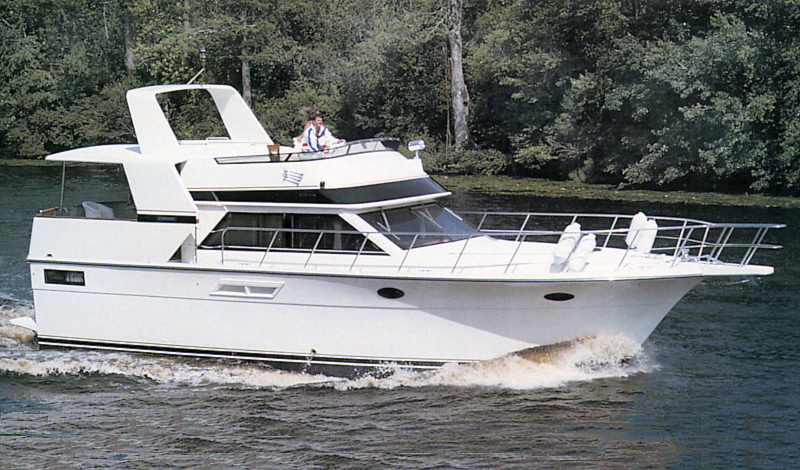 Name: 45 Motor Yacht
Length: 45'0"
Hull Type: Modified-V
Gross Weight: --
Fuel Capacity: 400 gals.
Model Years: 1988—1991
Draft: 4'0"
Beam: 15'2"
Water Capacity: 190 gals.
Waste Capacity: 70 gals.
Length w/ Pulpit: --
The Californian 45 MY is a comfortable aft-cabin motor yacht whose conservative profile hasn’t aged much since she went out of production in the early 1990s. Unlike many modern aft-cabin designs with their raised aft deck, the Californian is actually a flush-deck design, which accounts for her rather high freeboard. Built on a solid fiberglass modified-V hull, the Californian 45 was available with two floorplan configurations, one with over/under berths in the forward stateroom and the other with an island double berth forward. A lower helm was optional; both heads have separate stall showers; and plenty of teak woodwork was applied throughout the interior. Note that a hardtop and aft-deck enclosure panels were standard. Additional features include wide side decks, a roomy flybridge with the helm forward and lounge seating aft, a bow pulpit, and a radar arch. No lightweight, the Californian 45 MY is generally recognized as a good performer in a chop. Powered with 375hp Cat diesels, she’ll cruise at 15–16 knots and reach a top speed of about 20 knots. GM 485hp 6-71s were optional. The Californian 52 Cockpit MY is the same boat with a cockpit extension.