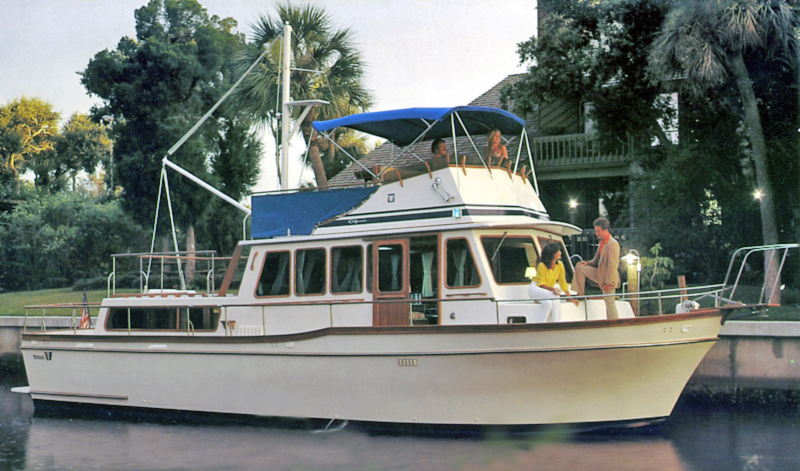 Name: 42 LRC
Length: 41'8"
Hull Type: Modified-V
Gross Weight: --
Fuel Capacity: 500 gals.
Model Years: 1975—1984
Draft: 3'4"
Beam: 13'8"
Water Capacity: 175 gals.
Waste Capacity: 50 gals.
Length w/ Pulpit: --
A popular boat (over 200 were built during her lengthy production run), the Californian 42 LRC is a traditional trawler-style design with a prominent bow and a distinctive appearance. Hull construction was solid fiberglass, and a long keel provides excellent tracking and directional control. For her length, she’s not an especially roomy boat inside, and her narrow beam and wide side decks take their toll on the salon’s dimensions. The forward stateroom shown in the floorplan below is somewhat unusual with stacked single berths to starboard just opposite the head—a seemingly practical layout for cruising, and one that may well appeal to experienced cruisers. (It should also be pointed out that there were other floorplans used for the Californian 42 but we’ve been unable to secure the drawings.) Note the direct access to the cockpit from the aft stateroom. Additional features include wide side decks, bow pulpit, functional mast and boom, and sliding deck access door at the lower helm. Early models with twin 185hp Perkins diesels cruise at 11–12 knots. Later models with 210hp Cats cruise at 14 knots.