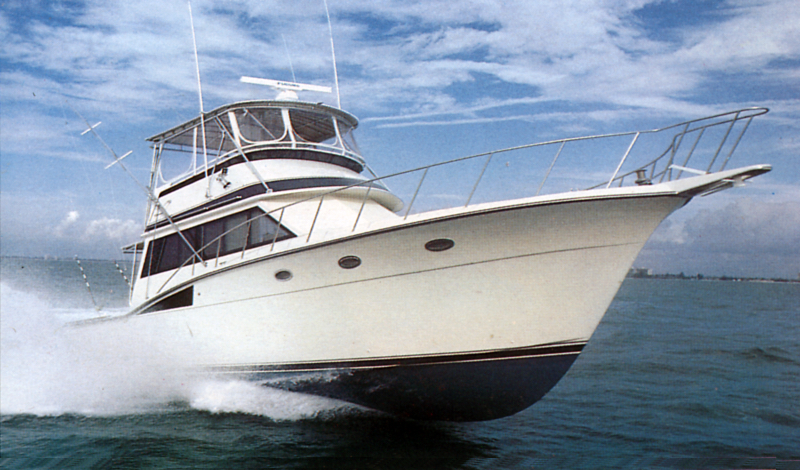 Name: 42 Convertible
Length: 42'5"
Hull Type: Modified-V
Gross Weight: --
Fuel Capacity: 400/550 gals.
Model Years: 1986—1989
Draft: 4'4"
Beam: 15'2"
Water Capacity: 190 gals.
Waste Capacity: --
Length w/ Pulpit: --
Designed for the West Coast sportfishing market but equally at home as a family cruiser, the Californian 42 Convertible was built on a solid fiberglass hull with a shallow keel and moderate transom deadrise—the same rugged (and relatively heavy) hull used in the production of the Californian 42 Motor Yacht. Two floorplans were used during her production years, both two-stateroom affairs with a queen berth in the master stateroom and stacked bunks in the guest cabin. The original layout had a mid-level galley and a second stall shower, and the more recent floorplan has a dinette in lieu of the second head. A good deal of teak woodwork is evident throughout the interior (pre-1988 models have a walnut interior), and the cockpit is large enough for some serious fishing. Topside, the 42’s tournament-style flybridge has the helm aft and bench seating forward. Note the cockpit engine room access door—an unusual feature in a boat under 50 feet back in the 1980s. Caterpillar 375hp diesels deliver a cruising speed of 20 knots, and the 485hp 6-71s cruise the Californian 42 at 22 knots with a top speed of about 26 knots.