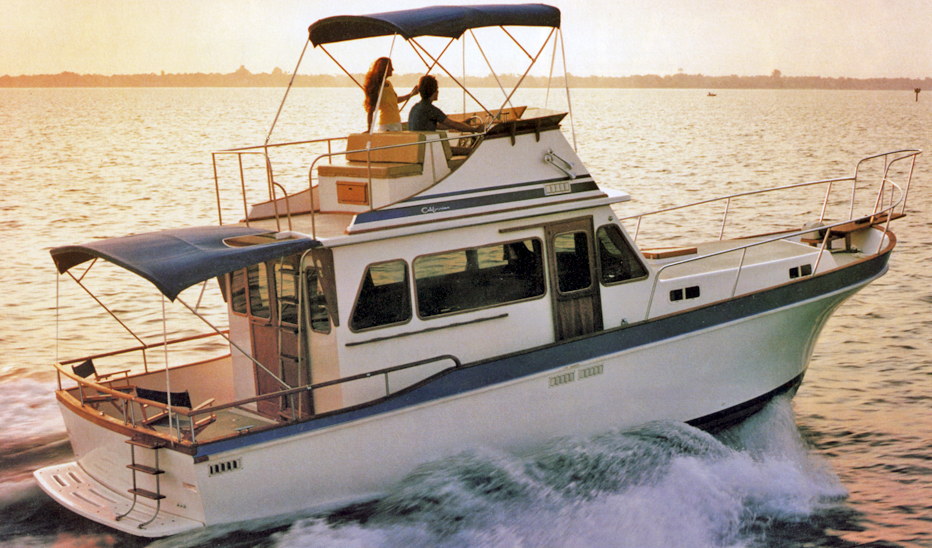 Name: 34 LRC
Length: 34'6"
Hull Type: Modified-V
Gross Weight: --
Fuel Capacity: 250 gals.
Model Years: 1977—1984
Draft: 3'2"
Beam: 12'4"
Water Capacity: 75 gals.
Waste Capacity: 30 gals.
Length w/ Pulpit: --
Traditionally styled and showing a distinct trawler profile, the Californian 34 is a versatile family cruiser with exceptional low-speed economy and—when equipped with the right engines—true planing-speed performance. Her solid fiberglass modified-V hull has a fine entry forward that gradually levels out into nearly flat aftersections for stability and greater speed. While most trawler-style boats were imported from Asia (Taiwan, specifically) during the 1970s and ’80s, the Californians were among the few to have been built in the U.S. Wide side decks give her a rather narrow salon, although the two staterooms below come as a surprise on such a small boat. (While a single-stateroom layout was available, the two-stateroom arrangement was more popular.) Dark mahogany woodwork is applied throughout the interior. Outside, the aft deck area is large enough for a few deck chairs, and there’s seating for a few guests on the large flybridge. Cruising speed is about 7 knots with standard 85hp Perkins diesels. Among several engine options, a pair of 210hp Cat (or 200hp Perkins) diesels cruise the Californian 34 efficiently around 16–18 knots while reaching 20+ knots wide open.

Two-stateroom layouts are rare in 34-footers.