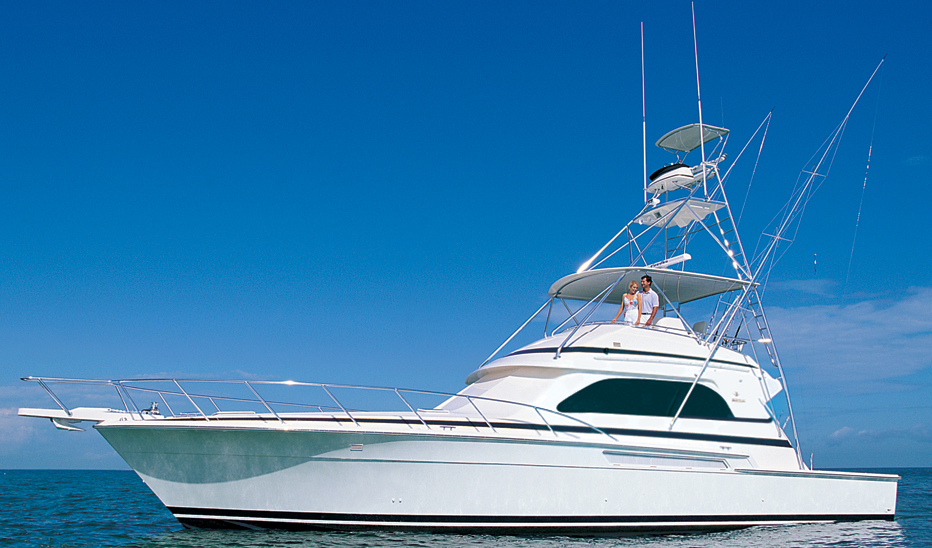 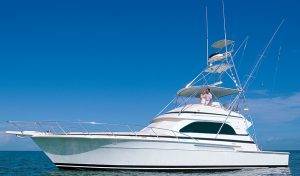 Name: 54 Convertible
Length: 54’0”
Hull Type: Deep-V
Gross Weight: --
Fuel Capacity: 1,453 gals.
Model Years: 1996—2003
Draft: 5’2”
Beam: 16’11”
Water Capacity: 250 gals.
Waste Capacity: 50 gals.
Length w/ Pulpit: --
Bertram introduced the original 54 Convertible in 1981 and went on to build 177 hulls before production ended in 1992. By any standard, she was a classic boat with all of the assets required in a purebred sportfishing yacht. The Bertram 54 Convertible introduced in 1996 is best described as an updated version of the original with more aggressive styling, redesigned cockpit, and modern interior decor. Retained, however, is the proven deep-V hull of the original, widely considered one of the best open-water rides in the business. Below decks, the three-stateroom maple interior of the Bertram 54 features an open-plan salon with L-lounge seating to port and entertainment center to starboard. A full-service galley with Corian counters is forward to port, across from a 4-person dinette. Like most convertibles in her class, the master stateroom is amidships and the VIP stateroom is forward. A washer/dryer is found in the starboard guest stateroom. All three heads have separate stall showers. The large cockpit of the Bertram 54 has a removable in-deck fish box, tackle center with sink and livewell, transom door with gate, and engine room access. Caterpillar 1,350hp 3412 diesels cruise at 26–28 knots (low 30s top).

Name: 54 Convertible
Length: 54'0"
Hull Type: Deep-V
Gross Weight: --
Fuel Capacity: 1,200/1,450 gals.
Model Years: 1981—1992
Draft: 5'2"
Beam: 16'11"
Water Capacity: 250 gals.
Waste Capacity: 50 gals.
Length w/ Pulpit: --
A proven tournament winner and the sportfishing superstar of her era, the Bertram 54 is one of the most popular convertibles her size ever built. Indeed, only a few boats compared with the 54 when it came to open-water handling and heavy weather performance. Built on a solid fiberglass deep-V hull, several three-stateroom interiors were available over the years. Most came with an L-shaped dinette forward to starboard in the salon, opposite the U-shaped galley. The master stateroom is to port and includes a walkaround queen bed and private head with shower. The forward VIP stateroom came with V-berths (or a queen bed) and also included a private head/shower, while the starboard guest stateroom has over/under berths and private access to the day head. A washer/dryer was a popular option, and later models have a light oak interior rather than the original teak woodwork. Among her more significant revisions, the front windshield was eliminated in 1986, and in 1987 the flybridge was restyled and the fuel capacity increased. Detroit 800hp 12V71 diesel cruise at 24–25 knots. Later models with 1,100hp 12V92 engines cruise at 26–28 knots. A total of 177 Bertram 54s were built.

Proven tournament winner is widely regarded as one of the best sportfishing yachts of her era.

Near perfect blend of design and construction-few production (or custom) boats her size compare when it comes to heavy-weather handling. Deckhouse windshield eliminated in 1986; flybridge restyled and fuel capacity increased in 1987. Several floorplans to choose from. Huge cockpit for a 54-foot yacht.