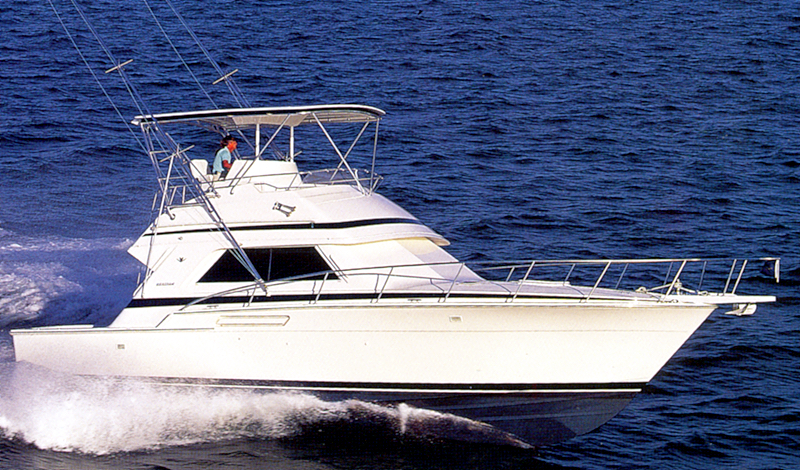 Name: 43 Convertible
Length: 43'4"
Hull Type: Deep-V
Gross Weight: --
Fuel Capacity: 546 gals.
Model Years: 1988—1996
Draft: 4'4"
Beam: 14'11"
Water Capacity: 160 gals.
Waste Capacity: 35 gals.
Length w/ Pulpit: --
Bertram got it right in 1988 with the introduction of the 43 Convertible, a purebred sportfishing machine ranked among the top-tier boats in her class. With her aggressive styling, good open-water performance, and large fishing cockpit, it’s no surprise that Bertram sold a lot of these boats during her production years. Like all Bertram convertibles of her era, the 43 rides on a deep-V hull with cored hullsides and a solid fiberglass bottom. The original two-stateroom interior has the galley forward to starboard in the salon, a layout that permitted two heads below. A convertible L-shaped sofa is to port, and a choice of teak or light oak woodwork was available. Note the rod storage locker in the salon overhead. Beginning in 1990, a more versatile galley-down interior added a dinette to the salon at the cost of the second head below. (Other configurations followed including a single-stateroom layout, but only a few were built.) The huge 120 square-foot cockpit—reinforced for a fighting chair—came standard with a livewell, tackle center with sink, and engine room access. In In 1994, the generator was moved from under the cockpit sole to the engine room and the windows were restyled. Detroit 535hp 6V92 diesels cruise at 23–24 knots.