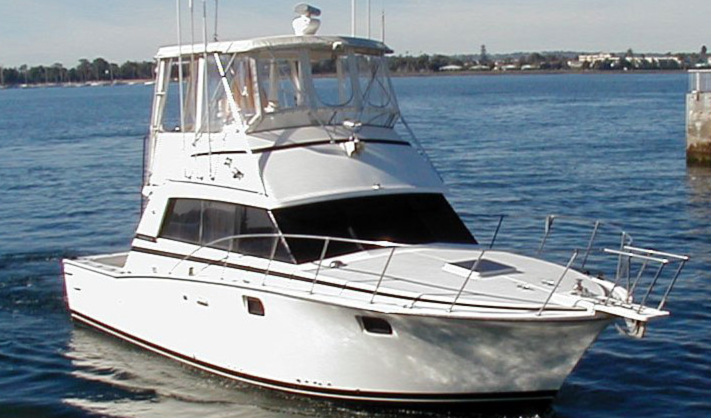 Name: 38 III Convertible
Length: 38'5"
Hull Type: Deep-V
Gross Weight: --
Fuel Capacity: 395 gals.
Model Years: 1978—1986
Draft: 4'2"
Beam: 13'3"
Water Capacity: 100 gals.
Waste Capacity: --
Length w/ Pulpit: --
The Bertram 38 III replaced the original Bertram 38 Convertible built from 1970 through 1976. Faster, lighter, and roomier than her predecessor, the 38 III’s large cockpit and tournament-style flybridge made her well suited for serious sportfishing events. Her two-stateroom floorplan was originally set up with an optional head in the forward stateroom, a novel arrangement that lasted until 1986 when an updated layout replaced the head with a storage locker. A lower helm was optional, and a spacious in-line galley runs the entire starboard side of the salon. Note that in 1982 Bertram replaced the original Nautilex cockpit sole with a fiberglass deck (a major improvement), and teak interior woodwork became standard. A wet ride, the 38 III is a capable sea boat. Those powered with MerCruiser gas engines cruise at 17–18 knots. Cat 300hp diesels (19–20 knots cruise) were popular as were the Cat 355hp and Cummins 380hp VT903 engines, both of which cruise in the low 20s. Production ceased in 1987 with the introduction of the new Bertram 37 Convertible. A total of 331 Bertram 38 IIIs were sold making her one of the bestselling 38-foot sportfishing boats ever built.