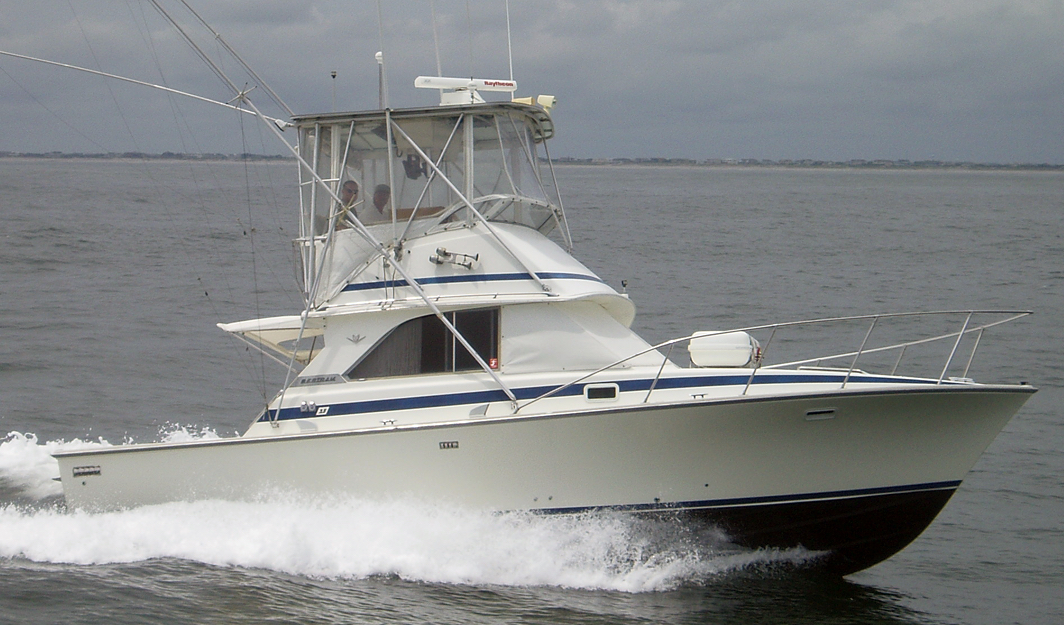 Name: 35 Convertible
Length: 35'4"
Hull Type: Deep-V
Gross Weight: --
Fuel Capacity: 285/273 gals.
Model Years: 1970—1986
Draft: 3'2"
Beam: 13'3"
Water Capacity: 50/75 gals.
Waste Capacity: 25 gals.
Length w/ Pulpit: --
Introduced in 1970 and remaining in production for the next 15 years, only a handful of boats in her class approached the Bertram 35 Convertible in owner popularity. She was the recipient of many updates and modifications during her long production run, and used models remained in demand for many years after the last hull was delivered in 1986. While many owners enjoyed the Bertram 35 as a versatile family cruiser, she’s most at home as a fishing boat where her large cockpit and precise handling qualities are most appreciated. Below, there are accommodations for four in the 35’s cozy interior where the galley is to port in the salon and the head has a separate stall shower. In 1981 the MK II model came out with an updated flybridge layout, and the following year the original vinyl-over-plywood cockpit sole was replaced with a fiberglass sole—a big improvement since the plywood tended to rot. In 1984 teak cabinets and trim replaced the original woodgrain mica decor. Big-block gas engines were standard in the Bertram 35 (18–20 knots cruise), however most were diesel powered with 215hp Cummins engines (16–18 knots cruise) or 300hp Cats (23–24 knots cruise) among the most popular.

Classic Bertram convertible with distinctive profile ranks among the best 35-footers ever produced.