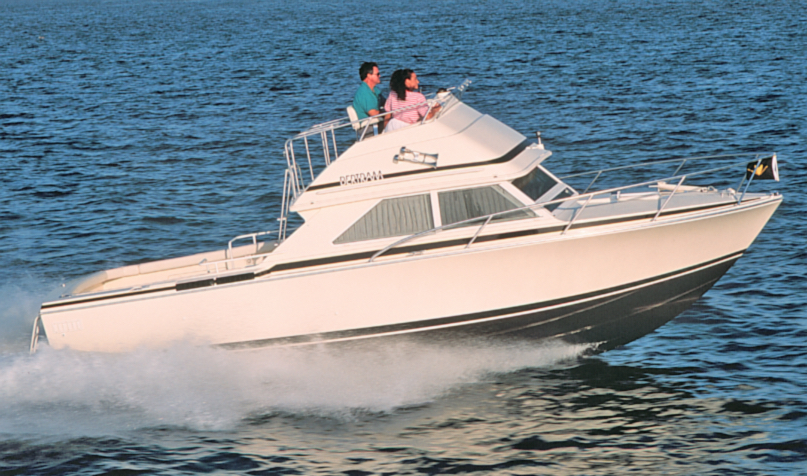 Name: 28 Flybridge Cruiser
Length: 28'6"
Hull Type: Deep-V
Gross Weight: --
Fuel Capacity: 185/240 gals.
Model Years: 1971—1994
Draft: 2'8"
Beam: 11'0"
Water Capacity: 54 gals.
Waste Capacity: 40 gals.
Length w/ Pulpit: --
With over 2,800 built, the Bertram 28 remains the best-selling Bertram ever. Designed along the lines of the classic Bertram 31, the 28 quickly established her reputation among serious anglers as a rugged and durable offshore fisherman with comfortable cabin accommodations. She rides on a solid fiberglass deep-V hull, and the 11-foot beam is wide for a 28-footer. Below deck, the cabin layout includes berths for four with a convertible dinette, an efficient galley, standup head, and plenty of storage. (The original mica interior was dropped in 1983 and replaced with light oak woodwork.) In 1982 the 28 II came out with a slightly extended cabin bulkhead, in 1994 the fuel was increased to 240 gallons, and with the 28 III model (1990–94) the cabin was slightly revised and the flybridge bench seat was replaced with a pedestal helm seat. Superior workmanship and constant refinements kept the Bertram 28 in the forefront of small fishing boat designs during her long production run. Twin 230hp gas inboards (19–20 knots cruise) were standard until 1985 when they were replaced with larger 260hp MerCruisers (21–22 knots cruise).