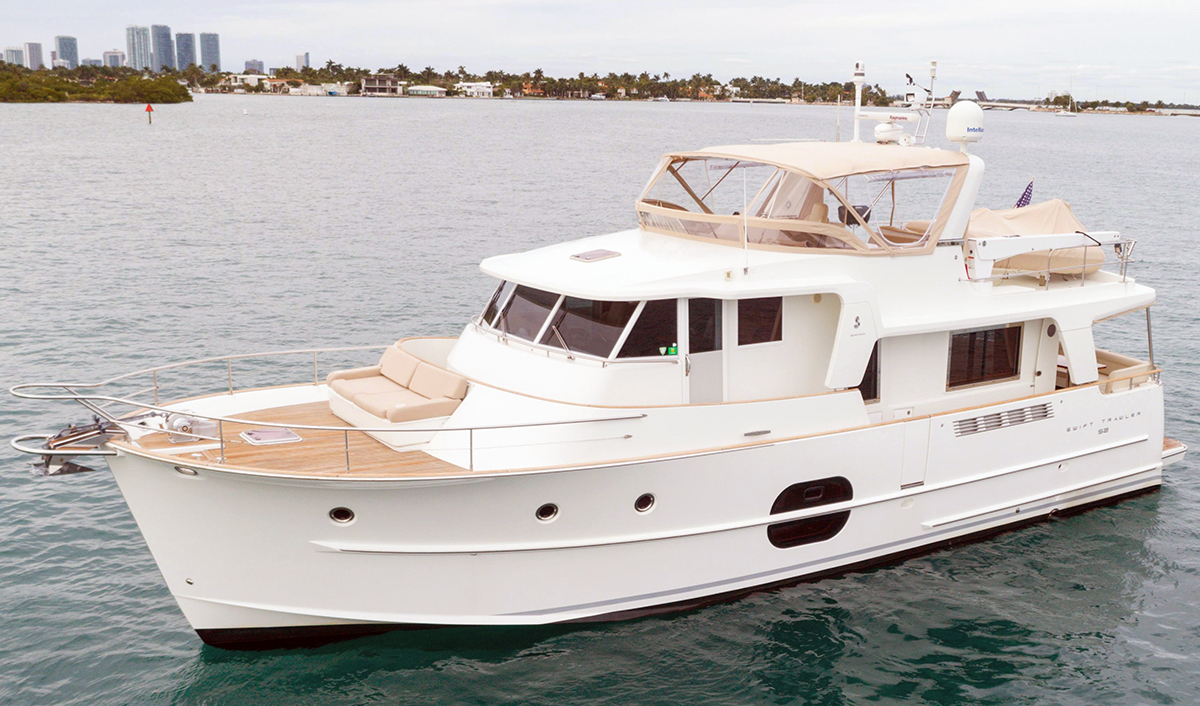 Name: Swift Trawler 52
Length: 52
Hull Type: Semi-Disp.
Gross Weight: --
Fuel Capacity: 1,057 gals.
Model Years: 2008—2019
Draft: 4'3"
Beam: 16'1"
Water Capacity: 211 gals.
Waste Capacity: NA
Length w/ Pulpit: --
The Swift Trawler 52 is a traditional pilothouse yacht whose classic lines (note the Portuguese bridge) and straightforward layout will appeal to experienced cruisers. A big U-shaped galley is forward of the salon with its U-shaped settee to port and two fixed chairs opposite with TV cabinet in between. Up four steps is the pilothouse with chart table, settee and twin deck doors. A central stairway leads to the lower deck with VIP stateroom forward, small guest cabin with over/under berths to starboard, and full beam master aft with walkaround queen bed, vanity desk and two large portlights on either side — a unusual feature to find on a trawler. Wing doors and a teak swim platform are standard, and the cockpit lazarette has space for a washer/dryer. Aft crew quarters are optional. The flybridge has its own miniature galley with sink, cold/hot water sink, icebox and provisions for an electric grill. The engine room — which is surprisingly large — can be reached from the cockpit lazarette or through a hatch in the salon sole. Standard power is a pair of 575hp Volvo D9 diesels. At a cruising speed of 10 knots the Swift Trawler 52 has a range of close to 750 nautical miles. Top speed is just over 20 knots.