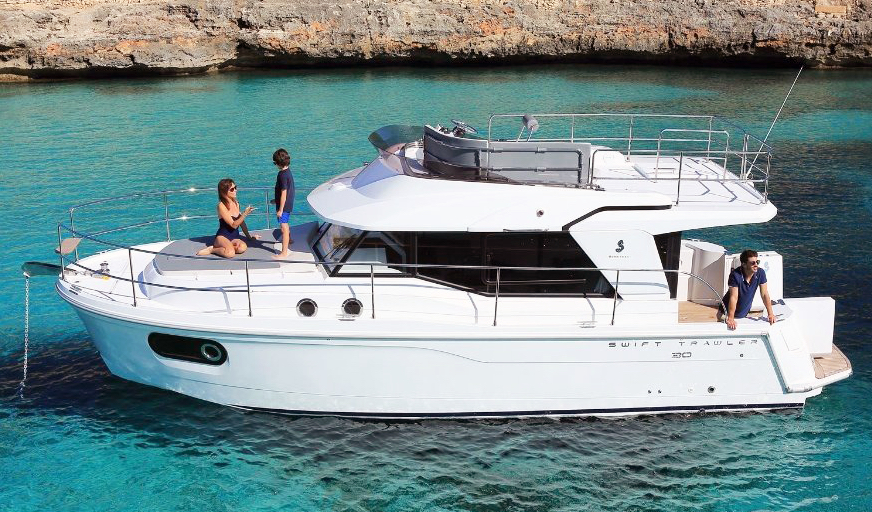 Name: Swift Trawler 30
Length: 32'9"
Hull Type: Modified-V
Gross Weight: --
Fuel Capacity: 185 gals.
Model Years: 2016—2019
Draft: 3'5"
Beam: 11'7"
Water Capacity: 80 gals.
Waste Capacity: 23 gals.
Length w/ Pulpit: --
Introduced in 2016, the Beneteau Swift Trawler 30 is the smallest trawler-style cruiser to come along in many years. She was originally marketed as a downsized version of the popular Swift Trawler 34 although the styling similarities are somewhat vague. Boasting an asymmetrical deck layout (the starboard side deck is wider than the port side deck), the compact salon is well appointed and functional. The long cabinet to port houses the galley and storage cabinets and a sliding door at the double-wide helm provides easy deck access. The dinette table can be moved to the cockpit and large cabin windows admit plenty of natural light making the salon surprisingly open and bright. To conserve space, the head is split with the shower room to port. (A second cabin with bunk beds can replace the shower room.) The cockpit isn’t huge but with a removable ladder and two gates on the swim platform it’s big enough. The engine bay is reached from hatches in the salon sole. Built on a modified-V hull with a long keel and very wide 11'7"" beam, a single Volvo 370hp D6 diesel will cruise the Swift Trawler 30 at 15–17 knots. Over 100 were reportedly built in the first year of production.