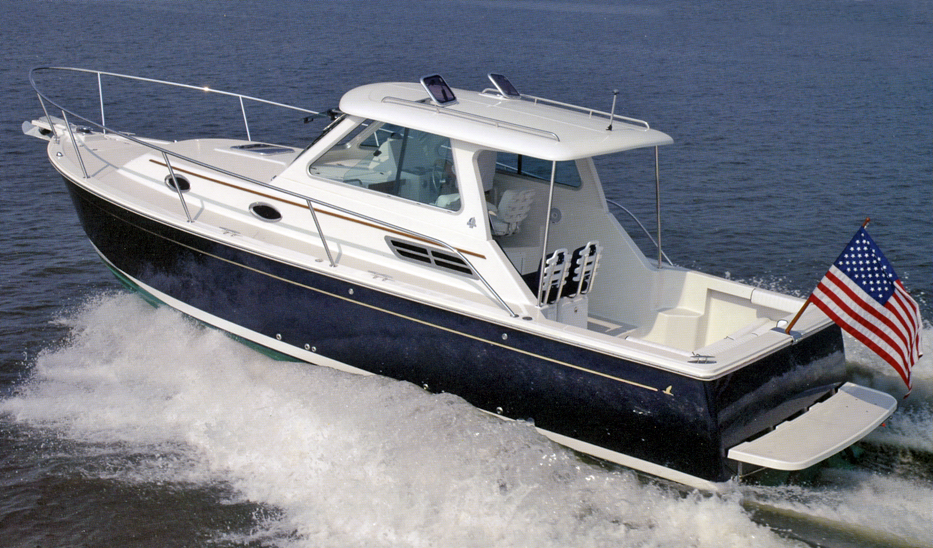 Name: 29
Length: 29'5"
Hull Type: Modified-V
Gross Weight: --
Fuel Capacity: 150 gals.
Model Years: 2004—2009
Draft: 2'6"
Beam: 10'5"
Water Capacity: 30 gals.
Waste Capacity: 30 gals.
Length w/ Pulpit: --
The Back Cove 29 is notable in that she was the first of what soon became a series of Back Cove models produced in recent years by Sabre Yachts. With her Down East lines and single-diesel power, the Back Cove 29 combined beauty and simplicity at a price competitive with similar Down East boats her size from other manufacturers. Built on a modified-V with Divinycell coring and a prop pocket to reduce the shaft angle, her modest 2-foot, 6-inch draft allows the 29 to operate in unusually shallow water. At the semi-enclosed helm, sliding side windows and an opening center windshield section provide ventilation on hot days. Storage boxes are beneath both helm chairs, and an L-lounge to port on the bridge deck seats three. Note that a center hatch in the bridge deck sole lifts for engine access. Below, the Back Cove’s well-appointed cabin is accented with cherry cabinets, ash ceiling strips, and a teak-and-holly sole. The galley is to port, head to starboard, and the V-berth is forward—practical accommodations indeed for two adults. Wide side decks are a plus, and so are the sturdy bow rails. A bow thruster was standard. Cruise efficiently at 20 knots (26–27 knots top) with a single Yanmar 315hp diesel inboard.