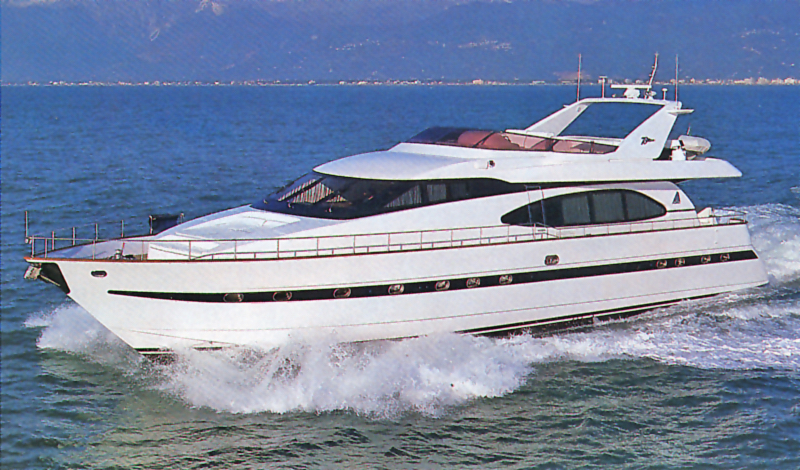 Name: 78 Ultra
Length: 78
Hull Type: Modified-V
Gross Weight: --
Fuel Capacity: 1,546 gals.
Model Years: 1994—1998
Draft: 5'8"
Beam: 19'5"
Water Capacity: 412 gals.
Waste Capacity: --
Length w/ Pulpit: --
A striking yacht with her aggressive profile and classic Italian lines, the Azimut 78 Ultra is a finely crafted production motor yacht whose lively performance comes as a surprise considering her size and displacement. The dominant feature of the 78 Ultra is her elliptical cabin windows, a styling feature incorporated into several other Azimut models during the late 1990s. Too, the flybridge is wider than usual thanks to an extension of the deck surface out over the side decks. Several floorplans were offered for the 78 Ultra including an “American” version with four staterooms (not counting the forward crew quarters). The galley is completely separated from the salon and wheelhouse. There’s a formal dining area in the spacious salon, and wide side decks lead to the foredeck sunning area. Additional features include a rich cherrywood interior, a large aft deck with an eight-place dining table, teak decks, a storage garage, and inside access to the flybridge. Built to ABS standards, the Azimut 78 Ultra will cruise at 23 knots with twin 1,150hp MTUs, and she’ll reach a top speed of 26–27 knots. Over 45 of these yachts were built.